We are a Not for Profit Charity,  proudly serving the needs of the Community throughout Ireland since 1876

Nazareth House Fahan – A Privilege of the Community

To celebrate International Women’s Day, we spoke with the woman who is in charge of one of the best, if not the best, Nursing Homes in the country. Wilma from Nazareth House in Fahan. As Director of Nursing at Nazareth House since 2011, Wilma has been quietly overseeing changes and improvements at this much loved and sought after care facility for people in need of an ‘alternative home’.

Speaking to Wilma, she quickly emphasizes that the success of Nazareth House and the driving force behind the home is all the women and men, who make up her team of 65 staff who work tirelessly to improve the life standards of the 43 occupants presently in their care. The staff are a very dedicated team with a number of them having worked at Nazareth House for many years and some over 20 years each.

So who is Wilma? Wilma D’Souza D’Almeida is a very warm and happy person who seems to spread those two qualities to all around her, whether to fellow staff members, residents or their family members.

Originally from the southern region of India, Wilma came to  Ireland in 2007 after receiving her degree in Nursing and worked near Donegal Town for several years whilst continuing studies in Dublin and Sligo, gaining extra qualifications – something that Wilma encourages and facilitates for all her staff members in order to have the most up to date knowledge and ability  to provide the best care for their residents.

In 2011 the position of Director of Nursing became available in Fahan with Wilma being the successful applicant. Nine years later, Wilma and her family reside in Ludden and just love Inishowen because of its “friendly people.” A true advocate of the ethos of Nazareth House, Wilma truly upholds the virtues of Compassion, Hospitality, Love, Justice, Patience and Respite. As someone who enjoys their work immensely, Wilma believes that she and her staff have a major role to play in other people’s lives and that it is important to build up good relationships with people and bonding with them in order to fulfill the trust that they place in you caring for their relatives. 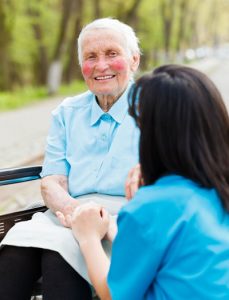 Nazareth House is Fahan are continuously investing in their property and staff at the home to make it as comfortable and homely as possible for the people living there, aswell as providing the upmost and up to date medial care and attention  by providing opportunities on an ongoing basis for staff training.

During the last couple of years, refurbishment has taken place throughout the building with revamping of the sitting room and main hallway, bedrooms, installation of a quiet room, the beautiful sensory garden outside and now they are about to embark on a comprehensive upgrading of the heating system which will run onto a hefty six figure sum. With public funding support limited, Nazareth House depends greatly on the generosity of local people and through their own fundraising efforts, one of which is their weekly lotto.

During 2017, Nazareth House completed a Sensory Garden. This was made possible by the many donors and supporters who took this on as a specific project. The residents are so delighted to have this new garden space. Please continue to support Nazareth House Fahan. It is very much appreciated by those living there now and people who will live there in the future.

There are various ways in which you can help with fundraising efforts. Please check out our volunteer page for details.

Nazareth House in Fahan overlooks breathtaking views of Lough Swilly and wider Donegal and has been operating as a nursing home since 1981, where it has been and continues to be, a privilege of the Community to enable its residents to live life to the full.

This website uses cookies to improve your experience while you navigate through the website. Out of these cookies, the cookies that are categorized as necessary are stored on your browser as they are essential for the working of basic functionalities of the website. We also use third-party cookies that help us analyze and understand how you use this website. These cookies will be stored in your browser only with your consent. You also have the option to opt-out of these cookies. But opting out of some of these cookies may have an effect on your browsing experience.
Necessary Always Enabled
Necessary cookies are absolutely essential for the website to function properly. This category only includes cookies that ensures basic functionalities and security features of the website. These cookies do not store any personal information.
Non-necessary
Any cookies that may not be particularly necessary for the website to function and is used specifically to collect user personal data via analytics, ads, other embedded contents are termed as non-necessary cookies. It is mandatory to procure user consent prior to running these cookies on your website.
SAVE & ACCEPT